2016 was a very active year for Revelstoke Bear Aware Society. There were 638 reports concerning black bears reported to Revelstoke Bear Aware and the conservation officer service and 4 reports of grizzly bears in 2016. The Conservation Officer Service destroyed 24 black bears in 2016, and there were unconfirmed instances of residents destroying further bears. There was 1 cub sent to the Northern Lights Rehabilitation Centre. Fortunately the cub was not food conditioned or habituated so he was the only candidate for rehabilitation. 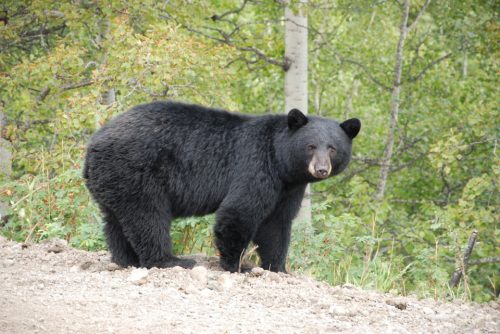 There were several incidents where bears destroyed property, including fences, breaking doors and tearing siding off houses. Bears were also breaking into locked and unlocked vehicles this year and  there were 7 confirmed cases of bears showing aggression towards humans specifically in the downtown and Kovach park areas. The first sighting of a bear in 2016 was on the 11th of April and the last bear reported so far was on December 31, 2016.

Garbage continues to be the number one attractant for bears in Revelstoke with 67% of bear sightings were associated with garbage. Half of the destroyed bears were killed as a direct result of becoming conditioned to eating garbage.  Most reports that concerned aggressive bears also concerned garbage.

The City has not yet chosen to implement a bear resistant garbage collection system in Revelstoke. Revelstoke Bear Aware Society and the Conservation Officer Service agree that the implementation of a bear resistant garbage system must be a priority before there is an incident concerning human safety. Revelstoke Bear Aware Society recommends that the process of bear proofing the garbage system should begin in mobile home parks where installation of centralized bear resistant bins is relatively easy and may even be more cost effective per house than curbside pickup from every house.

Unmanaged fruit and nut trees were another major attractant for bears in Revelstoke in 2016. There were two instances where bears attacked chicken coops. Outdoor freezers were also reported as attracting bears this season.

The City of Revelstoke is currently drawing up a Wildlife Attractant Bylaw to cover the issues related to unmanaged fruit trees and other attractants. Revelstoke Bear Aware Society has recommended such a bylaw, to the City, for years. We are hopeful that this bylaw will be passed this spring. This bylaw will bring Revelstoke one step closer to becoming a Bear Smart community. Implementing a city-wide bear resistant garbage system will be the final task.

Revelstoke Bear Aware Society is excited for the upcoming year and will be launching a new Bear Necessities program to provide further education on specific issues that are pertinent to residents. We will continue with the popular Gleaning Program in partnership with the Revelstoke Local Food Initiative. We will also be implementing our other long running education initiatives. You will see us at the Farmers’ Markets, in the schools, and on social media.

Revelstoke Bear Aware Society invites the community to attend its 2017 Annual General Meeting this spring. Come along on April 20th at 6:30pm to the Revelstoke Community Centre in the Macpherson boardroom. The meeting will last about 1 hour and will be a great opportunity to have some input into the society and to support the society by purchasing your 2017 membership (single $10, family $20).

To report bear sightings or conflicts with bears please call the 24-hour hotline at 1-877-952 RAPP (7277). To get the latest information about bears in Revelstoke, follow us on Facebook @revelstokebearaware.